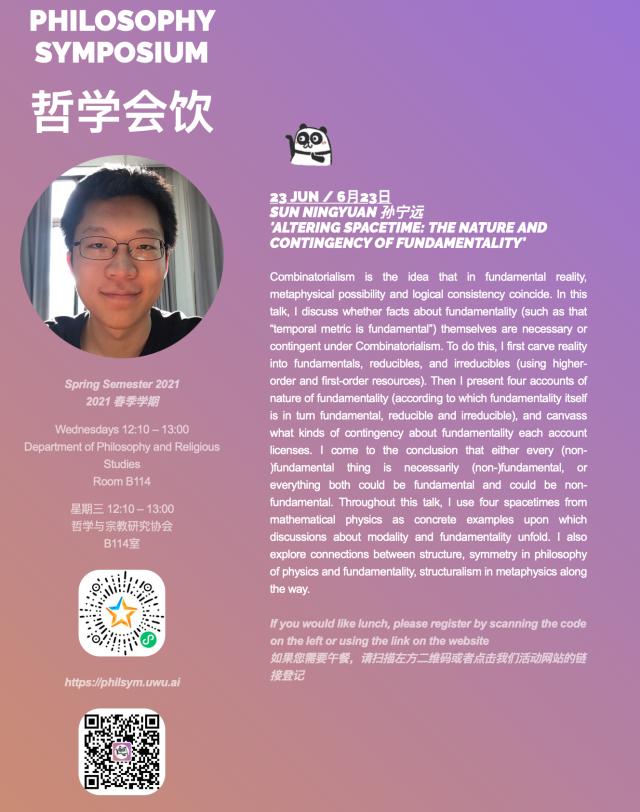 题目: Altering Spacetime: The Nature and Contingency of Fundamentality

摘要：Combinatorialism is the idea that in fundamental reality, metaphysical possibility and logical consistency coincide. In this talk, I discuss whether facts about fundamentality (such as that “temporal metric is fundamental”) themselves are necessary or contingent under Combinatorialism. To do this, I first carve reality into fundamentals, reducibles, and irreducibles (using higher-order and first-order resources). Then I present four accounts of nature of fundamentality (according to which fundamentality itself is in turn fundamental, reducible and irreducible), and canvass what kinds of contingency about fundamentality each account licenses. I come to the conclusion that either every (non-)fundamental thing is necessarily (non-)fundamental, or everything both could be fundamental and could be non-fundamental. Throughout this talk, I use four spacetimes from mathematical physics as concrete examples upon which discussions about modality and fundamentality unfold. I also explore connections between structure, symmetry in philosophy of physics and fundamentality, structuralism in metaphysics along the way.