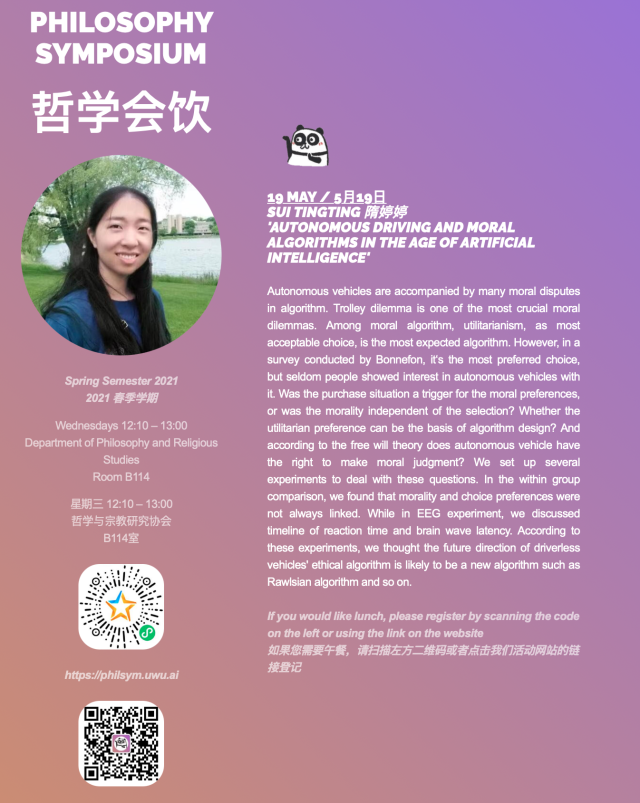 题目: Autonomous Driving and Moral Algorithms in the Age of Artificial Intelligence

摘要：Autonomous vehicles are accompanied by many moral disputes in algorithm. Trolley dilemma is one of the most crucial moral dilemmas. Among moral algorithm, utilitarianism, as most acceptable choice, is the most expected algorithm. However, in a survey conducted by Bonnefon, it‘s the most preferred choice, but seldom people showed interest in autonomous vehicles with it. Was the purchase situation a trigger for the moral preferences, or was the morality independent of the selection? Whether the utilitarian preference can be the basis of algorithm design? And according to the free will theory does autonomous vehicle have the right to make moral judgment? We set up several experiments to deal with these questions. In the within group comparison, we found that morality and choice preferences were not always linked. While in EEG experiment, we discussed timeline of reaction time and brain wave latency. According to these experiments, we thought the future direction of driverless vehicles' ethical algorithm is likely to be a new algorithm such as Rawlsian algorithm and so on.